This Saturday, on our way to see the Batman movie, Mike and I stopped off at the Fiesta Cancun on E. Riverside in Loves Park.  Our experience there was quite pleasant one.  We were seated almost immediately and a server showed up promptly to take our drink orders.  Being in a hurry, we just ordered a margarita to share.  The margarita, normally $3.99, was on special for $2.99.  We felt this was a very fair price.  The drink was a fine one – but after all, it is difficult to mess up a margarita. Along with our drinks, we were given complimentary chips and salsa to snack on. 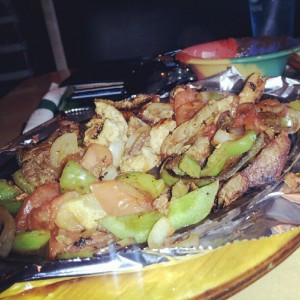 Our food came within about 10 minutes of ordering.  We decided to share the Fiesta Cancun Special Fajitas.  My best friend introduced me to these fajitas recently and I was dying to get them again.  As always, they were superb.  They cost $11.99 for a single order and somewhere around 18.99 for a double order. Don’t bother getting the double order, unless you want a lot extra.  The single order is more than enough for 2 people.  These fajitas have shrimp, steak, chicken, and chorizo mixed with peppers and onions.  They also come with sour cream, rice, and guacamole.  If you do plan to share the single order, be sure to order extra tortillas, as you only get 3 with the meal.  Mike and I ate until we were stuffed and we even had enough leftovers to take to my brother.  The total bill was about $16.50 – very good for 2 people.

The atmosphere of Fiesta Cancun is just what you would expect from a family restaurant – nothing exceptional.  The staff is friendly and the brightly colored decor is perhaps supposed to remind one of Mexico?  I have not been to Mexico so I wouldn’t know whether the decor does the country justice or not.  One very positive aspect is that the booths are very tall so you and your dinner mates can have a private conversation without being oogled by the other patrons of the restaurant.  Being gawked at by strangers while eating makes me very uncomfortable.

Overall, we felt Fiesta Cancun was somewhere we would definitely return to.  The prices are very reasonable, the service is good, and the food is delectable!

For my 21st birthday, Jen’s ma got me a gift card to Ciao Bella on Riverside in Loves Park, and I finally got to use it this Saturday. I’d heard of the place, knew some people that liked it, but never really got around to visiting. I heard it was mainly older folk that went there, and I thought it was more of a diner. This wasn’t entirely true, but it did in fact remind me of a diner. There were people bustling all over the place, it was quite loud, there were blinds on the windows like you might find at a Denny’s, and other things that didn’t remind me of a higher quality dining establishment. It was decorated well enough with pictures of Italy, old photos, and the like but I felt that the overall atmosphere was lacking any sophistication or uniqueness.

We arrived for dinner at I think around 6:30 or so. It was a full house, only a couple spaces in the mall where we could park. We were seated right away, but in the back of the restaurant by the kitchen. I ordered the Chicken Parmesan and Jen ordered the Eggplant Parmesan. We were given bread, oil and parsley, and grated cheese. The bread was hard, and I like soft bread with oil. Maybe some people prefer hard bread, but I find it is harder to eat that way, but I’m glad they gave us something as I was starving. We didn’t ask much from the waiter, but it is fair to say he did his job well. 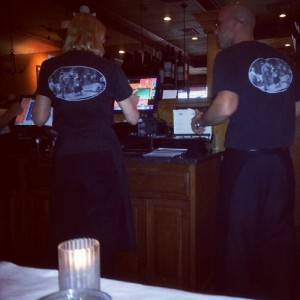 While we waited, we got to watch the employees working there. Not because we were creeping, but because that was all we had to view plus it was quite distracting. Busboys would bump into our table, waitresses would lean on our booth as they waited to enter information into the cash register (which was right across from us, closer to everyone else in the room than we were), and there would be a constant flow of traffic coming to and from the kitchen. I caught a couple of their jokes, stuff they were doing after work, someone was talking about someone who got fired, and other stuff that I do not want to be forced to hear while I’m at a restaurant. It was an unpleasant place to sit, and would suggest that if placed in that booth by the kitchen, which shouldn’t be there in the first place, you ask your server to move. We would have if we weren’t planning on writing a review of an average unsolicited experience, or if we weren’t too lazy to move. This was probably my biggest complaint. I tried to snap a picture of our view, but the picture I got doesn’t do the situation justice. 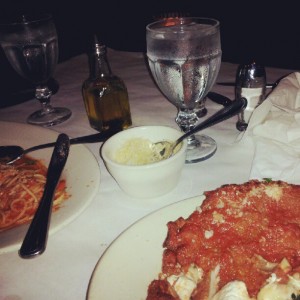 The food arrived just a bit before I’d expect it to come. And the taste was unique. I asked Jen’s opinion and Jen’s mom, and without even mentioning my own thoughts on the taste they both independently came to the conclusion that it tasted like throw up. The taste was faint, and probably caused by too much acid in the sauce or something, but the fact that all three of us came to this conclusion independently worries me. I was not at all fond of the pasta and red sauce that came with the chicken either, but the chicken itself was fine so long as you can get past the idea of it tasting like throw up. Jen said that her eggplant was pretty good, but agreed that the noodles were sub par. They were watery and had a strange taste to them.

Overall, not great. Between both of us, we spent about $34 with tip included. I probably wouldn’t go back unless to give them another review to see if perhaps it was just the busy day that made their restaurant fall far below what I would hope to experience.

The District in Downtown Rockford

On Sunday night, Mike and I went to the District  to celebrate my best friend’s birthday.  It is a restaurant/bar located on W. State in downtown Rockford.  We arrived around 6:30 and the place was nearly dead, as to be expected on a Sunday night I suppose.  We were greeted right away by a friendly server who took our drink orders.  Mike was drinking a draft beer that ran 6 bucks a glass and I a Mimosa that was on special for 3 dollars.  We were displeased that the price of draft beer was so incredibly high.   However, the Mimosa was quite delicious and well-priced.  Needless to say, this is surely not a place to get your drank on unless you are ordering one of the specials.  They also had “Big Ass Beers” for three dollars.  I do not know what is meant by a “big ass beer”, nor am I interested in knowing.

The food proved to be more impressive than the beverages.  Mike had the turkey swiss panini, which was mediocre at best.  But, the french fries that he got on the side were heavenly!!  I recommend them to any french fry connoisseur.  I chose the chicken bacon panini, which was most satisfying.  The mashed potatoes that accompanied my sandwich left a lot to be desired.  They were somewhat lumpy and only lukewarm.  Our paninis cost approximately $8.50, which is maybe a bit much for what it is, but not outrageous.  Our friends ordered the spinach artichoke dip, which was overpriced for the amount that they got.  Also, the cheese on the top was a sticky stringy mess.  They essentially had to peel the cheese off of each others fingers to get a bite.  My food came out in a timely manner but they had to wait quite a long time for their mess of spinach dip, which is baffling considering the cook most likely only had to remove it from the freezer, pop it in the microwave, then coat it with sticky cheese.  Our total bill, which consisted of 2 paninis, 3 beers, and a Mimosa, was $39.50.  It should only have been about 2/3 of that for the amount of food/drink that we actually consumed.

The place was quite big, and also empty, being that it was a Sunday night.  This left us feeling a bit isolated at our tiny table.  It was also rather cold in there.  However, we began to enjoy ourselves much more when we went into the back game room.  The room is complete with a foosball table, pool table, a couple arcade type games, and several big comfy chairs.  The foosball costs a dollar to play and the pool is free on Sundays.  It was a great place to sit, chat, drink wildly expensive beer, and play games.  Also, it is worth mentioning that the bathrooms were very clean and sanitary.  I know this is often a complaint of women that the bathrooms are dirty.  My only grievance is that there was no hook in the stall to hang my purse!

Overall, Mike and I felt this was a fine place to go eat and have a few drinks with friends (on special only, of course) , but not somewhere we would frequent.  Oh, and beware of the prices of the drinks that you are ordering because the server seems to have no idea how much they cost and the prices are not listed on the menus!

Today, me and my fiancé Jen officially open our personal blog to the public! Our goal here is to share with you what we enjoy: food! And other musings too of course. We plan to offer reviews on restaurants (mainly in the Greater Rockford and Chicago areas), some of the stuff we’ve cooked up in the kitchen, interesting finds in the world of food and dining, and much more. Suggestions on places to visit and review, ideas for our new blog, and anything else you’d like to contribute are most welcome!